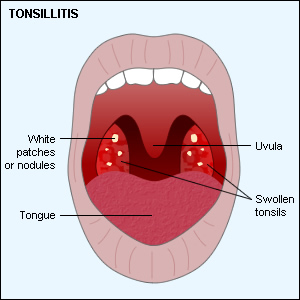 Tonsillitis is inflammation of the tonsils. The tonsils are 2 small glands on either side of the throat. When a person has tonsillitis their tonsils become inflamed, infected and swollen.

What do the tonsils do?

The tonsils play a key role in helping to protect the body against infection. This is especially important in young children, whose immune systems are still developing. The tonsils act as a barrier, trapping an infection and stopping it spreading to other parts of the body. The infection may stay in the tonsils, causing tonsillitis. As a person gets older their immune system becomes stronger, and the body doesn’t rely on the tonsils as much to fight infection. That’s why tonsillitis is more common in children.

Most cases (around 80%) of tonsillitis are caused by a virus. Many types of viruses can cause tonsillitis, including cold and flu viruses. These can spread easily from person to person through coughing or sneezing, hand contact and direct contact with the virus on surfaces (e.g. door handles).

Some cases of tonsillitis are caused by a bacterial infection, usually the Streptococcus type of bacteria).

A common cause for tonsillitis is also infectious mononucleosis, or glandular fever virus.

What are the symptoms of tonsillitis?

Regardless of whether tonsillitis is caused by a virus or by bacteria, the symptoms may include:

If a skin rash is also present, it may suggest the cause is bacteria.

If a person has tonsillitis caused by the flu virus, they may also have flu symptoms such as aching muscles. People with a cold may also have a runny nose and cough. Sometimes younger children with tonsillitis may have nausea, vomiting and tummy pain.

Anyone can get tonsillitis, but it is most common in children. Some people have tonsillitis that keeps returning.

When should I see the doctor?

A doctor may take a swab of the throat to collect some of the infected cells. This is sent to a pathology lab for testing, to see what is causing the tonsillitis. Sometimes a doctor may order a blood test to check for any abnormalities.

In rare cases a person will develop complications from tonsillitis, generally only when the infection is caused by bacteria.

In very rare cases the infection may spread and cause inflammation in other parts of the body, for example:

The following steps may help to relieve the symptoms of tonsillitis whether it is caused by a virus or bacteria:

Do I need my tonsils out?

People who have frequent bouts of tonsillitis that stop them from functioning normally, cause difficulty breathing because of enlarged tonsils, or who have bacterial tonsillitis that doesn’t respond to treatment may need an operation to remove the tonsils (called a tonsillectomy).

If a child has frequent episodes of tonsillitis and misses a lot of school, for example from disrupted sleep due to snoring, doctors may suggest a tonsillectomy.

Sometimes people develop other complications from tonsillitis (e.g. obstructive sleep apnoea (mainly children), severe problems swallowing or an abscess on the tonsils), and may also require surgery to remove the tonsils.

A tonsillectomy is done by an ENT (ear, nose and throat) surgeon. In children, sometimes the adenoids (lymph nodes in the throat) are removed at the same time.

A person having tonsillectomy will have the operation in a hospital under general anaesthetic, meaning they will be asleep during the operation. There are several ways that the surgeon can remove the tonsils, and all are done through the mouth. No incisions are made into the skin.

Most people can leave hospital on the same day or the next day after surgery. The throat will usually feel sore after the operation and swallowing may be difficult to start with. Pain relievers can help with the pain and make it easier to swallow. Most people can eat and drink anything they feel like, but it can be good to avoid citrus foods or drinks for a few days (e.g. orange juice) because it can cause pain.

Ear pain is common after surgery. It doesn’t mean the person has an ear infection – it is referred pain from the throat and should settle in a few days.

Some people will have bleeding from where the tonsils were removed. This usually settles by itself, but it’s important to see a doctor immediately if the person is coughing up blood.

Children who have had a tonsillectomy will usually need to miss school for around 2 weeks to stop them knocking the scar off the tonsil bed in rough play while things are healing.

Can tonsillitis be prevented?

It is difficult to prevent the spread of viruses that cause tonsillitis, but practising good hygiene can help to prevent infections from spreading.

Sore throats: symptoms, causes, tests and when you should seek medical advice.

Find out about sore throat treatments including self-help measures, painkillers, lozenges, and when antibiotics are needed.

Most of us know what a sore throat feels like - pain or irritation in your throat that’s often worse when you swallow.

Sore throats: symptoms, causes, tests and when you should seek medical advice.

Find out about the symptoms, diagnosis and treatment of glandular fever (infectious mononucleosis) - sometimes called the kissing disease.

Obstructive sleep apnoea (OSA) is a condition that affects breathing during sleep. Affected children frequently snore and have poor quality sleep that affects their behaviour and concentration during the day.