Latest Health News FODMAPs not gluten the real culprit for some?

FODMAPs not gluten the real culprit for some?

What if avoiding gluten and wheat was helping your symptoms, but not for the reasons you thought?

Indeed, a recent CSIRO survey of 1184 adults found that around 11% avoided food containing wheat and gluten.

The most commonly given reasons for going gluten-free were abdominal bloating, abdominal pain and fatigue – common symptoms of irritable bowel syndrome (IBS), a condition that affects one in 7 adults.

Given that coeliac disease is far less prevalent than IBS, affecting only 0.4% (that’s only 4 in a thousand) of Australians, it would appear that too many healthy people are unnecessarily avoiding gluten and wheat.

It’s a worldwide phenomenon and, while the scientific evidence supporting the benefit of these dietary restrictions is lacking (in the absence of coeliac disease, wheat allergy or IBS), the demand for wheat and gluten-free products is growing at 34% per annum.

However, our team at Monash University has found that there are a number of components in gluten-containing grains (such as wheat, rye and barley) that may trigger gut symptoms in people with IBS. And we have named these carbohydrate components FODMAPs*.

FODMAPs are poorly absorbed in the small intestine and rapidly fermented by bacteria in the large bowel, producing gas and triggering gut symptoms in IBS sufferers.

Gluten-containing grains such as wheat are particularly high in the FODMAP fructan, so by choosing gluten-free food people tend to eat fewer fructans, leading to better symptom control3.

We have also investigated the role of gluten in triggering gut symptoms in people without coeliac disease.

One study conducted among 37 people with IBS who claim to have symptom relief when following a strict, gluten-free diet [so called non-coeliac gluten sensitivity (NCGS)], required participants to consume a gluten-free, low FODMAP diet for two weeks. They were then randomly assigned to one of three diets – all low FODMAPs – (but contained either high gluten, low gluten or zero gluten).

While all participants experienced gastrointestinal symptom improvements on the initial low FODMAP diet, no independent, gluten-specific effects were observed.

In other words, whether they ate gluten or not made no difference to symptoms.

The study calls the clinical diagnosis of NCGS into question and suggests that FODMAPs, not gluten, are the trigger of gastrointestinal symptoms in people with so-called, NCGS.

However, our team has also discovered that gluten and FODMAPs tend to co-exist in foods. As outlined in this graph (below), gluten-free grain and cereal products were lower in FODMAPs (mostly fructans and GOS) compared to gluten-containing products. 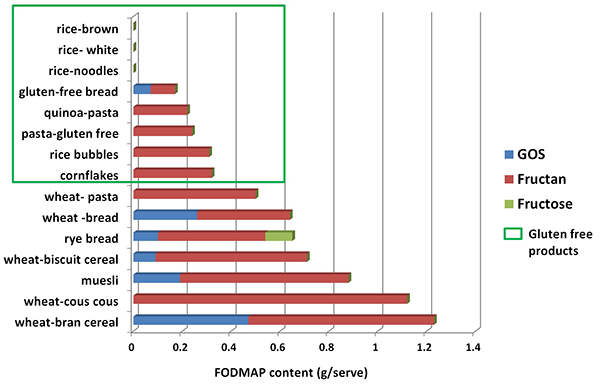 So, by choosing gluten-free grain and cereal products, people are often choosing low FODMAP and this relationship might explain why individuals without coeliac disease report symptom relief on a gluten-free diet.

Coeliac disease is a condition caused by an abnormal immune response, or sensitivity, to a dietary protein known as gluten. Gluten is found in wheat, rye and barley.

Gluten-free diet may harm those who don't need it

A gluten-free diet may harm those without coeliac disease, leading to deficiencies and higher mercury and arsenic concentrations.

Find out the importance of a gluten-free diet for people with coeliac disease and discover which foods contain gluten and which do not.

Bread in the diet

Breads can include various grains and seeds, and there are many things to look out for when choosing bread, such as the flour, GI, salt and additives. Find out how to make a healthy choice.

Food stores are serving up gluten in their foods even when it’s advertised as gluten-free - and in some cases, they don’t understand the difference.