Fat no longer the fall guy in new US dietary thinking

The 2015 Dietary Guidelines for Americans are unlikely to include an upper limit on fat, reversing nearly 4 decades of nutrition policy, write 2 researchers in an article published by the esteemed medical journal JAMA.

The committee of scientists who advise the US government on national dietary guidelines has quietly removed restrictions on total fat consumption from its latest technical report.

The 2015 Dietary Guidelines for America's Committee (DGAC) report neither lists total fat as a nutrient of concern nor proposes restricting its consumption, says the article.

“But the campaign against saturated fat quickly generalised to include all dietary fat. Because fat contains about twice the calories per gram as carbohydrate or protein, it was also reasoned that low-fat diets would help prevent obesity, a growing public health concern,” they write.

They note that the DGAC report tacitly acknowledges the lack of convincing evidence to recommend low-fat–high-carbohydrate diets for the general public in the prevention or treatment of any major health outcome, including heart disease, stroke, cancer, diabetes, or obesity.

“Based on years of inaccurate messages about total fat, a 2014 Gallup poll shows that a majority of US residents are still actively trying to avoid dietary fat, while eating far too many refined carbohydrates.

“Based on the strengths of accumulated new scientific evidence and consistent with the new DGAC report, a restructuring of national nutritional policy is warranted to move away from total fat reduction and toward healthy food choices, including those higher in healthful fats,” they argue.

Nutrition Australia agrees. According to its nutrition program manager, Aloysa Hourigan, Australia is heading in the same direction, as reflected in the latest food pyramid (see below), released in May.

“I think it’s an important change because the emphasis on total fat has never been corrected,” she says.

“It’s about ensuring you have enough healthy oils in the diet and enough omega 3s, along with a good variety of food,” Ms Hourigan says. But she cautions, “You still have to worry about the kilojoules.” 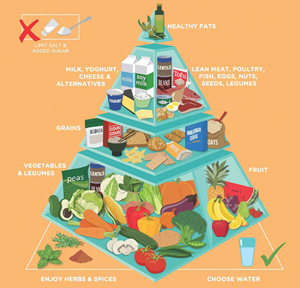 Saturated fats are usually solid or waxy at room temperature and some saturated fatty acids can increase your cholesterol level and put you at increased risk of heart disease.

If you have a low proportion of protein in your diet, the characteristics of the human appetite are such that this will lead us to overeat fats and carbs.

High blood cholesterol can increase your risk of cardiovascular disease. By eating less saturated fat you can help to lower your LDL or 'bad' cholesterol.

The Australian Dietary Guidelines are designed to give you enough of the nutrients essential for good health and reduce your risk of some diseases.

Find out about which types of exercise are best to burn fat and help you lose weight. To reduce total body fat, focus on increasing your physical activity, rather than decreasing energy consumed.