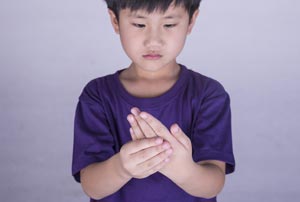 Juvenile idiopathic arthritis (or JIA) is the newer name for this group of conditions. It is also called ‘juvenile chronic arthritis’, ‘juvenile arthritis’, or ‘juvenile rheumatoid arthritis’. ‘Juvenile’ means occurring in childhood. ‘Idiopathic’ means that no cause can be found after a medical checkup, which could include tests. ‘Chronic’ means long-term.

Juvenile idiopathic arthritis is divided into several different conditions, mainly depending on:

The types of juvenile arthritis are:

The main symptom of juvenile idiopathic arthritis is having painful joints for no obvious reason. Symptoms can include limping, stiffness, avoiding using an arm or leg due to pain, clumsiness of the hands, fevers, and swollen joints.

Different types of juvenile arthritis can have different patterns of symptoms:

Most forms of juvenile idiopathic arthritis are probably caused by the child’s immune system mistakenly attacking some of the body’s own cells and tissues.

How this happens is not known, and may involve several problems. If a child is already at risk due to genetics, these conditions could be set off by environmental factors in the womb or in childhood. Some scientists suspect that juvenile arthritis could be triggered by infections (viruses or bacteria), tobacco smoke, or stress, but none of these possible risk factors has been proven.

Who gets juvenile arthritis?

The first symptoms of juvenile arthritis are more common among preschoolers (age 1–3 years), and children in late primary school to early high school (9–14 years), than among other age groups.

An Australian national health survey found that about 1 in 1000 children younger than 16 has juvenile idiopathic arthritis. It is more common in girls than boys, and is rare in babies less than a year old.

There is no specific test to tell whether a child has juvenile idiopathic arthritis. Children normally need referral to a rheumatologist – a specialist doctor who deals with musculoskeletal (joints, muscles and bones) disease and autoimmune disease. To get the right diagnosis, your child may need:

A child may need several blood tests for rheumatoid factor (RF) during the first 6 months after symptoms start. Tests are repeated to find out whether the test is still positive 3 months later.

Other conditions that can develop in children with juvenile arthritis include:

The main aim of treatment is to get the inflammation and pain under control as quickly as possible so that a child can continue a normal active life. This helps minimise the risk of long-term disability.

In the past, doctors focused on measuring the amount of inflammation to see whether treatment was working. Now they are more interested in whether a child can stay active and have a normal everyday life.

Several different types of medicines are used to manage juvenile idiopathic arthritis, including:

Many children will need more than one type of treatment, either over time or in combination.

In Australia, children with juvenile arthritis are often given NSAIDS to help with pain and stiffness, especially during the early stages of the disease. NSAID treatment is usually only short term. These medicines are available in Australia either on prescription or over the counter. Some brands are only available for some age groups, and some are not funded by the Pharmaceutical Benefits Scheme (PBS).

Corticosteroid injections into the joint are the main treatment for Australian children with oligoarthritis, and are also sometimes used for polyarthritis. Injections can be effective for 6–12 months. Injections are generally done under general anaesthetic for younger children and those who need treatment for more than one joint, and under sedation or with strong painkillers for older children.

Oral corticosteroids (prednisone or prednisolone) are used for children with polyarthritis who have severe pain and stiffness even while taking NSAIDs. These medicines are only used for a short while. Children taking these medicines need to be checked often so that the dose can be adjusted and, if possible, gradually reduced.

For children with systemic arthritis (Still’s disease), treatment can include corticosteroids such as methylprednisolone given by intravenous infusion (drip). Occasionally, children with severe symptoms are given other medicines that are normally used for adults with rheumatoid arthritis.

As well as treatment by their general practitioner and rheumatologist, children with arthritis in several joints may need treatment from several allied health professionals such as physiotherapists, occupational therapists, orthotists and dietitians. Some children and their families may also need help from a social worker or nurse educator.

Some children with oligoarthritis may need casts or splints, often with physiotherapy to improve flexibility strengthen their muscles. Orthotics and shoe inserts can be effective to reduce foot pain and improve activity.

Exercise may help some children and is generally not harmful, but it is not proven to improve the symptoms of juvenile idiopathic arthritis.

Many children with juvenile idiopathic arthritis no longer have symptoms by the time they reach adulthood. Children who test positive for rheumatoid factor are more likely to have arthritis as adults.

Benzodiazepines: what are the effects?