Gallstones are stone-like deposits that form in the gallbladder, a small pear-shaped organ located under the liver. The gallbladder is responsible for the storage of bile, a greenish-brown fluid used in the digestive process to digest fats. Bile is made in the liver. 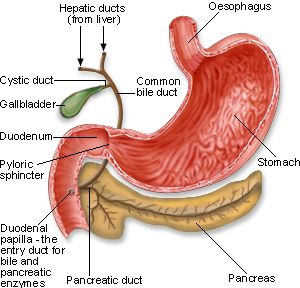 How do gallstones form?

Gallstones develop when crystals form in bile, the liquid stored in the gallbladder. Over time, the crystals can grow into hard, stone-like lumps.

Gallstones may be tiny, like a pinhead, or as large as a golf ball, and may vary in number from one to several hundred. Lots of small crystals can form so-called ‘biliary sludge’.

There are 2 main types:

Cholesterol stones are the more common type of gallstones. They are generally a yellowy-green colour, and can occur if your liver produces too much cholesterol.

Pigment stones occur less frequently. They are small and dark brown or black in colour, and consist of bilirubin salts. Pigment stones tend to occur in people with cirrhosis of the liver, biliary tract infections or certain blood disorders.

How common are gallstones?

About 10 per cent of the general Australian population (and 15 per cent of people older than 50 years) have gallstones, although they often do not show any symptoms.

There are several groups who are more at risk of developing gallstones than others. Risk factors include:

Gallstones can occur with or without producing symptoms.

About 70 per cent of people who have gallstones do not have noticeable symptoms and are often unaware that they have them. Gallstones may be discovered only during investigations for other problems. For this reason, they are sometimes called ‘silent’ gallstones.

Symptoms of gallstones generally occur when a stone becomes lodged in one of the ducts (tubes) that carry the bile to and from the gallbladder (these include the cystic duct and the bile ducts).

The most common symptom of gallstones is known as biliary colic, which is described as pain that:

Biliary colic usually settles when the gallstone moves, unblocking the affected bile duct(s) and releasing the pressure on the gallbladder. If the duct remains blocked, complications can result.

Attacks of biliary colic are commonly recurrent (repeating). They often occur after a fatty meal, as fat intake stimulates the gallbladder to squeeze its stored bile into the small intestine to help digestion.

Symptoms such as belching, bloating, fat intolerance and indigestion are not usually caused by gallstones, and are unlikely to be improved by removing them.

Gallstone signs and symptoms that require immediate medical attention include:

These signs and symptoms can indicate serious gallstone complications.

Fever and severe abdominal pain (with or without nausea and vomiting) that does not get better after a few hours may indicate infection or inflammation of the:

The pancreas is a digestive gland near the gallbladder that produces insulin and digestive enzymes. The digestive enzymes flow into the small intestine through the same opening as the bile duct, so can be affected by a gallstone.

Jaundice occurs when the main bile duct becomes blocked, leading to the build-up of a substance called bilirubin in the bloodstream. Jaundice can be a symptom of cholangitis.

If you have any of these serious symptoms you should seek medical care immediately.

Cholecystitis (inflammation of the gallbladder) is usually the result of a gallstone lodging in the neck of the gallbladder or the cystic duct (one of the bile ducts). It may be triggered by a large meal or a meal with fatty foods.

Acute cholecystitis is distinguished from biliary colic, which is the pain caused when gallstones temporarily obstruct a bile duct, but no gallbladder inflammation is present. Biliary colic pain tends to be less sharp, there is no fever, and the abdomen is less exquisitely tender.

It is usual for the gallbladder to be removed in order to avoid further pain and complications.

Cholangitis (inflammation of the bile ducts) may occur if your bile ducts become blocked and subsequently infected with bacteria from the small intestine. This is a serious condition requiring urgent treatment.

Symptoms of acute cholangitis include:

Acute cholangitis is treated with:

Gallstones that block the bile ducts and cause jaundice without inflammation also need to be removed.

Pancreatitis (inflammation of the pancreas) is a potentially serious disorder that occasionally develops in people with gallstones. It is more common in people with numerous small stones, and occurs when gallstones obstruct the duct leading from the pancreas (pancreatic duct).

Symptoms of gallstone ileus include:

The treatment for this is urgent surgery to remove the gallstone and relieve the bowel obstruction.

Surgical removal of the gallbladder is usually recommended for people who have had complications resulting from gallstones.

To diagnose gallstones, your doctor will ask about your symptoms, perform a physical examination and recommend some tests. Tests that can detect gallstones and associated conditions include the following.

Ultrasound scanning is the most common technique used to confirm the presence of gallstones. Ultrasound can:

Ultrasound is a quick and painless procedure that uses high-frequency sound waves, sent through a hand-held device that is moved across the abdomen. The echoes as the sound waves bounce off the gallbladder and other organs are converted to electrical impulses that show a picture on a monitor.

‘Silent’ gallstones, or gallstones that do not cause any symptoms, are sometimes detected incidentally during procedures such as ultrasounds or X-rays.

A HIDA scan – also known as cholescintigraphy or a hepatobiliary scan – involves having a small amount of a radioactive substance (known as a tracer) injected into a vein and then taking scans.

It can be used to detect:

Magnetic resonance imaging (MRI) produces detailed images of the body, and can be used to:

An investigation called endoscopic retrograde cholangiopancreatography (ERCP) is often performed if a gallstone is suspected to be lodged in the bile duct and cannot be detected using ultrasound.

This procedure involves looking at the bile duct through a small flexible tube called an endoscope, which is inserted into the mouth and directed carefully through the oesophagus and stomach, down into the duodenum (the first part of the small intestine), where the opening of the bile duct can be seen. A dye is then injected through the tube and into the bile duct and X-ray images taken to demonstrate any blockages that may be present.

Blood tests may be used to check for:

In general, treatment is needed for gallstones in the gallbladder that cause recurrent episodes of abdominal pain (known as biliary colic).

Gallstones that do not cause any symptoms (so-called ‘silent’ stones) generally do not require any treatment. However, some people with silent stones who are at high risk of gallstone complications, such as those with liver cirrhosis, may benefit from treatment.

Surgery to remove the gallbladder is the most common treatment for symptomatic gallstones. ‘Cholecystectomy’ – the term that doctors use for gallbladder removal – can be performed through open surgery or ‘keyhole’ laparoscopic surgery. Because your gallbladder is not an essential organ, it can be removed with few adverse effects.

An open cholecystectomy is a procedure where the gallbladder is removed through a large single incision in the abdomen. Open surgery is generally only used in people who are not suitable candidates for laparoscopic surgery.

Laparoscopic cholecystectomy, which is a type of ‘keyhole’ surgery, involves several small incisions being made in the abdominal wall through which very fine instruments and a specialised tiny video camera are inserted. The gallbladder is then removed under video surveillance and taken out of the body through one of the incisions. Laparoscopic surgery involves less post-operative pain, less scarring and allows a speedier recovery time compared with open surgery. Hospitalisation is generally 1-2 days, rather than the 5-8 days associated with open cholecystectomy. Sometimes surgeons may have to abandon the laparoscopic method and switch to open surgery if they have difficulties during the procedure.

As with any surgery, there are some risks, but it is a relatively safe procedure. Some people have more frequent bowel movements or diarrhoea following gallbladder removal, but these symptoms usually lessen over time.

There are various forms of non-surgical treatment available, one of which is the use of oral medication to dissolve gallstones. However, this treatment is only effective in the treatment of small, non-calcified gallstones and they have to be cholesterol gallstones. It is used only in rare circumstances such as in people for whom surgery is not an option.

With oral dissolution therapy, medication is taken by mouth to reduce the amount of cholesterol in the bile and to gradually dissolve cholesterol-containing stones. This form of treatment does not offer a particularly effective solution, as less than 50 per cent of stones are dissolved, and 50 per cent of these commonly recur after the medication has been stopped.

It can take months to years for the stones to dissolve.

Extracorporeal shockwave lithotripsy (ESWL) is another form of non-surgical intervention. It involves the generation of shock waves outside the body. Ultrasound is used to locate the gallstones, and the shock waves are directed at them until they shatter. Following lithotripsy, most people need to take medication to dissolve the fragments.

This treatment is generally only used for single, small gallstones, because it is not effective for multiple or large stones. As with any treatment that leaves the gallbladder in place, there is a risk of recurrent stones.

Stones that are lodged in the bile duct can cause serious problems and need to be removed either surgically, or by means of an endoscope (a flexible instrument that is passed down through the gastrointestinal tract). If your doctor suspects a gallstone may be lodged in the bile duct and it cannot be detected using ultrasound, they may request an investigation called endoscopic retrograde cholangiopancreatography (ERCP).

ERCP involves looking at the bile duct through a small flexible tube called an endoscope, which is inserted into the mouth and directed carefully through the oesophagus and stomach, down into the duodenum (where the opening to the bile duct can be seen). A dye is then injected through the tube and into the bile duct and X-ray images taken to demonstrate any blockages that may be present.

If gallstones are found to be blocking the bile ducts, they can be removed during the ERCP procedure. This involves passing a small instrument through the endoscope and making a small cut in the lower part of the bile duct (called endoscopic sphincterotomy). This will allow the doctor to remove stones by catching them in a tiny basket and removing them through the endoscope. Alternatively, with bile duct entrance widened by the cutting, the stones are freed up to pass into the small intestine, from where they will continue through the digestive system and exit the body.

How real is the fear factor?