Diverticular disease is a condition in which small pockets or out-pouchings called diverticula occur in the wall of the bowel. Diverticula can remain trouble-free or they can become inflamed or infected and cause symptoms, which is known as diverticulitis. Diverticulitis can be a medical emergency.

What’s the difference between diverticulitis and diverticulosis? 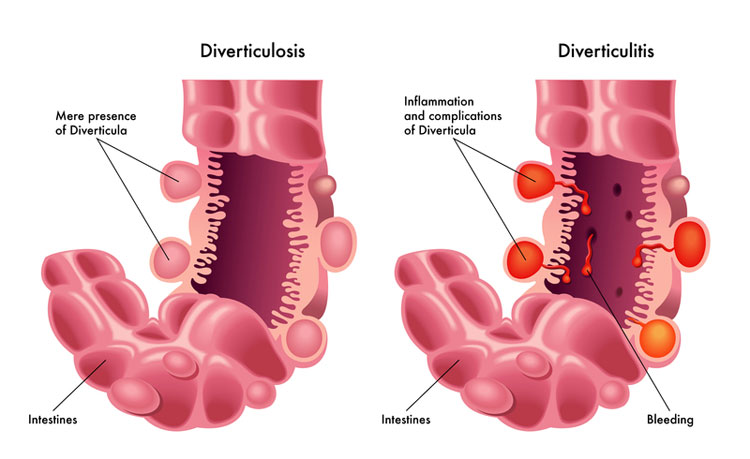 Eating a low-fibre (‘Western’) diet results in stools with a hard consistency that require high pressures to be generated in the bowel in order to push stools along and pass them. Diverticular disease is thought to result from these high pressures in the bowel forcing the lining of the bowel to pocket outwards through the surrounding muscle layer of the bowel, causing pouches.

Diverticulitis occurs when faecal matter becomes lodged in the pouches and causes inflammation or infection.

Diverticular disease is common, especially in countries like Australia where people generally eat a low-fibre diet. A third of Australian adults aged over 45 have it and about half of Australians older than 75 years, although for most their diverticula cause them no problems and they don’t know they have it. People who eat a diet high in fibre are much less likely to develop diverticular disease.

Young people who are obese have a raised risk, and more women than men have diverticular disease.

Diverticular disease generally causes no symptoms – only 1 in 4 people with it will have symptoms. Some people have:

Some of these symptoms are common to many conditions, so their presence does not always mean you have diverticular disease, but you should see your doctor as soon as possible for advice if they occur. Some people with diverticulitis will go on to develop complications.

If complications develop, symptoms can include bleeding from the bowel (when a blood vessel in the pouch breaks), or increasing and persistent pain and fever (when an abscess develops and/or ruptures or the pouch itself ruptures into the abdominal cavity). Although rare, these complications of diverticulitis are serious and usually require emergency treatment in hospital.

The most common serious complications of diverticulitis are:

Diverticulosis, when the pouches are not inflamed or infected, is often diagnosed by chance during investigations for other bowel problems.

Diverticulitis is usually diagnosed during investigation for an attack that’s in progress. To diagnose diverticulitis your doctor will first discuss your medical history and your symptoms and do a physical examination. They may suggest you first have tests to exclude other diseases as the cause of your symptoms.

Some of the tests and examinations that may be done are:

Colonoscopy and barium enema are not usually done when a person is having an attack of diverticulitis because of the risk of perforating the bowel or spreading infection.

People with bowel pouches which have not become inflamed are generally recommended to:

When the bowel pouches have become inflamed (diverticulitis), treatment is aimed at:

If there are signs of a generalised infection, such as a raised white cell count or fever, then also:

Treatment of a mild attack of diverticulitis may be carried out at home, and if caught early enough may respond to antibiotics in a few days.

If there are serious complications of diverticulitis, such as significant bleeding, an abscess that isn’t healed with antibiotics, rupture of pouches, or pain that can’t be managed, then hospital treatment will be required, which may include transfusion to replace lost blood, stronger painkillers (than paracetamol) and intravenous fluids, given by a drip. A small number of people will require emergency surgery to remove the affected area of bowel. This may result in them having a temporary colostomy.

Sometimes non-emergency surgery is planned to remove an area of bowel containing diverticula which have caused recurring diverticulitis in the past or which have joined onto another structure such as the bladder.

Keyhole (laparoscopic) surgery can sometimes be carried out for non-urgent removal of diseased areas.

There are some lifestyle changes you can make that will reduce the likelihood of you getting diverticular disease and that will lessen the chance of an attack of diverticulitis.

What to eat if you have diverticular disease

Sometimes people are given advice to avoid certain foods, such as nuts, pips, seeds and corn, however, there is no real evidence to support this advice. As mentioned above, ensure you have a good fibre intake and drink enough water to keep your stools soft.

Does diverticular disease cause cancer?

There doesn’t seem to be any link between diverticular disease and bowel cancer. Having diverticulosis or diverticulitis does not increase the risk of getting bowel cancer.

Dietary fibre is a component of plant materials which is largely digested by bacteria in the large intestine. High-fibre diets can help with bowel problems, cholesterol and diabetes.

What is constipation? Find out about symptoms, causes, risk factors and diagnosis. Plus, when you should seek medical advice.

Diagnosis of bowel cancer usually starts with an examination and tests.

In its early stages, bowel cancer often has no noticeable symptoms. Some factors increase the chance of developing bowel cancer.

Issues surrounding bladder or bowel continence are a concern for many people with spina bifida.