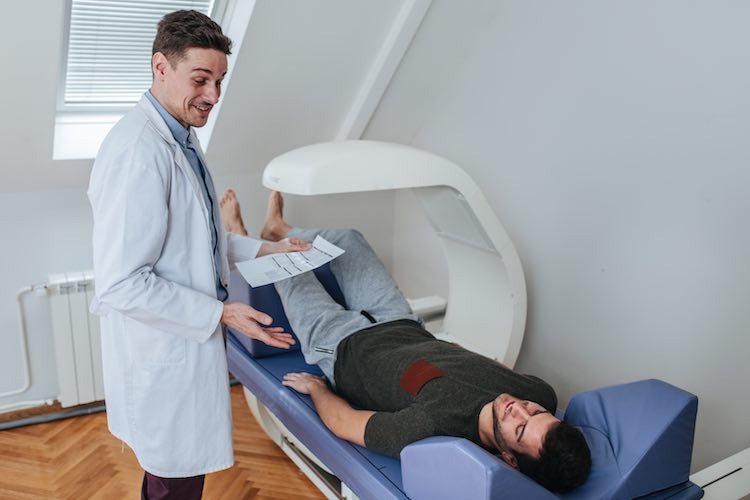 What is a bone mineral density test?

A bone mineral density test determines how rich your bones are in minerals such as calcium and phosphorus. The higher the mineral content, the denser and stronger your bones are and the less likely they are to break easily.

Why is a bone mineral density test done?

Bone mineral density testing is done to find out if you have osteoporosis or may be at risk of developing it. Osteoporosis is a condition in which the bones become less dense and their structure deteriorates, making them fragile and prone to fracture (break). Osteoporosis is common, especially in older Australians. It has no symptoms and is often not detected until a fracture occurs, which can be devastating for older people in terms of their general health, pain, independence and ability to get around.

Your doctor may also suggest bone mineral density testing to monitor how your bones are responding to treatment if you have already been diagnosed with osteoporosis.

Who should have a bone mineral density test?

Your doctor may suggest you have a bone mineral density test if you have had a fracture after a trivial injury or if you are suspected to have a vertebral (spinal) fracture . This type of fracture doesn’t always cause pain but may reduce your height or cause deformity of your spine (e.g. ‘dowager’s hump’).

In addition, the Royal Australian College of General Practitioners advises that you discuss with your doctor your risk of osteoporosis and whether you should have your bone mineral density investigated if you have (or have had) a major risk factor for osteoporosis, including:

How should I prepare for a bone mineral density test?

You can eat normally on the day of the test, but some doctors advise that you shouldn’t take calcium supplements for 24 hours beforehand. You should check this with the centre doing the test.

Tell your doctor if you have recently swallowed or been injected with contrast material — this happens for a barium examination and for some CT scans, for example — or a radioactive tracer for nuclear medicine tests. If this is the case, your scan may need to be postponed for up to 2 weeks.

You should also inform your doctor or the technician doing the test if there is any possibility that you might be pregnant.

What are the different types of bone mineral density test?

There are several types of bone mineral density tests. Testing usually focuses on the bones most likely to break due to osteoporosis — the lower (lumbar) spine and hip (femur). Sometimes a spinal X-ray is performed if a vertebral fracture is suspected.

A DXA test (sometimes called a DEXA test) is considered the standard bone mineral density test because it is the most accurate and uses the least radiation. Low-dose X-rays are used to evaluate specific bones — generally the lower spine (lumbar spine) and the hip (femur). This is the only test, other than a spinal X-ray, recommended by the Royal Australian College of General Practitioners.

For a DXA test you lie on a cushioned table while a scanner passes over your body. It is best to wear loose, comfortable clothing, but some centres prefer you to change into a gown. You will probably be asked to take off anything containing metal, such as jewellery or glasses. The test is painless and usually takes about 20 minutes.

This test uses CT scans and computer software to generate 3D images, usually of your lumbar spine. A QCT scan emits more radiation than a DXA test and is not as reliable. For a QCT scan, you lie on a moveable table that is guided into a large hollow cylinder.

Some pharmacies offer a ‘heel test’ in which ultrasound is used to measure bone mineral density of the heel. Although heel ultrasound tests don’t require a doctor’s referral, they do not look at the areas most at risk of fracture and are not considered as accurate as DXA tests.

Are there any risks of a bone mineral density test?

Bone mineral density tests, especially DXA tests, involve very little radiation — about the same amount as you would receive on a return flight from Brisbane to Melbourne, or one-tenth the radiation dose of a chest X-ray. The radiation does not remain inside your body after the test.

Generally, the benefit of accurately diagnosing osteoporosis – especially before you break a bone – is thought to far outweigh the very low risk of radiation.

How are the results of a bone mineral density test assessed?

Bone mineral density tests are interpreted by medical imaging specialists called radiologists. The radiologist will send a report back to the doctor who referred you.

The radiologist will calculate 2 scores to help interpret your bone mineral density test: a T score and a Z score. 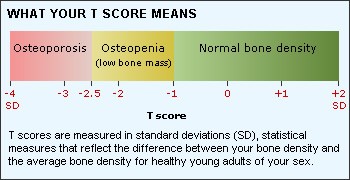 What if my bone mineral density test is abnormal?

If your bone mineral density test is abnormal, indicating osteopenia or osteoporosis, you should discuss the results with your doctor. He or she may want to do further investigations such as blood tests to look for conditions that might be contributing to bone loss, or an X-ray to see whether any fractures are already present. The good news is that you can take steps to improve your bone health — your doctor will be able to advise you on these. 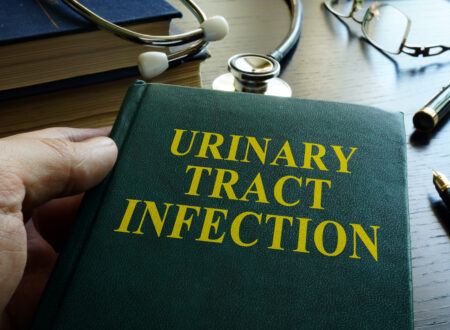