There are many stinging insects found in Australia, and a surprising number of Australians are allergic to their stings. The most common allergic reactions occur with stings from bees, wasps and ants. The degree of allergy varies widely, however, most people experiencing only mild symptoms such as local itching and minor swelling are not considered ‘allergic’ to insect bites.

Other people, though, may have severe allergic reactions when stung, and about 3 deaths are recorded every year. Most stings tend to occur in summer.

The majority of insect stings only cause discomfort and result in local pain, itching, some swelling and redness at the site of the sting, and this is not considered an allergic reaction. Local treatment is generally all that is needed to treat this type of sting. In these cases, the area should be washed and disinfected and ice applied to relieve the swelling and general discomfort.

In cases where the swelling continues to expand, antihistamine or possibly steroid treatment may be needed. On rare occasions, the sting site may become infected and antibiotics may be required to treat the infection.

What is an allergic reaction?

Signs of severe allergic reactions include:

If stung by a bee, do not pull or squeeze the sting that is left in the skin as this can cause more venom to be released. The bee sting should be removed by scraping it sideways with a fingernail, blunt knife or similar object. A wasp does not generally leave a sting in the skin. 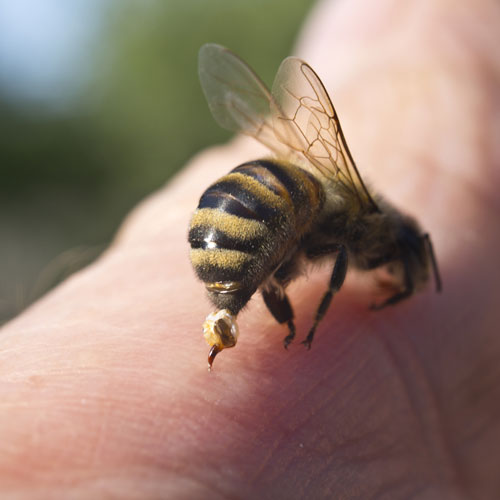 Anaphylactic reactions need to be treated with adrenaline. Self-injectable devices (such as EpiPen and Anapen) are available for people with known reactions. People with known anaphylactic reactions, whether to insect stings, certain foods or other triggers, are advised to carry the device at all times. These devices are already filled with adrenaline and should be injected into the muscle at the front of the thigh. These types of device hold only one dose, and people should be taken to hospital after the adrenaline shot — specialist observation is required and in some cases, further doses of adrenaline are needed.

Long-term desensitisation, called immunotherapy, can be undertaken for bee, wasp and jack jumper ant allergy to train a person’s immune system to not react to the insect’s venom. Immunotherapy takes between 3-5 years. It typically involves weekly injections for the first 3 months, and then injections at longer intervals. It is recommended for people who have life-threatening allergic reactions to insect venoms.

Contrary to popular belief, Australian scorpion stings do not appear to have life-threatening effects, even in children.

Immunotherapy should always be carried out by a doctor trained in allergy, and in Australia is usually carried out in specialist allergy clinics or hospitals.

Bed bugs are small parasitic insects that feed on human blood by biting the skin. Their bites are small, red itchy bites on areas of skin exposed while you are sleeping.

Anaphylaxis is a severe, sudden, potentially life-threatening allergic reaction. Find out the causes, symptoms and treatment for anaphylaxis.

Immunotherapy should always be carried out by a doctor trained in allergy, and in Australia is usually carried out in specialist allergy clinics or hospitals.

First aid tips for bites and stings from some of the most venomous creatures in the world - snakes, spiders, jellyfish, blue ringed octopus and cone snail - all of which are found in Australia.