What is prickly heat?

Prickly heat is an itchy, red skin rash that occurs when the sweat glands become blocked. Sweat that cannot flow onto the skin surface instead leaches into the skin, resulting in tiny areas of inflammation and swelling. These areas appear on the skin’s surface as red spots and blisters that produce a prickly feeling.

Although prickly heat can affect anyone, it tends to be more common in young babies and children. It is also more likely to occur in hot, humid conditions, particularly during the summer months. However, prickly heat can also develop in winter from sitting too close to a fire, or bundling up in too many clothes or blankets.

The skin is made up of an outer layer (epidermis), middle layer (dermis) and lower layer (subcutis). Prickly heat occurs when the sweat glands in your dermis become blocked. Sweat gets trapped and leaks into the surrounding skin, causing inflammation and swelling.

It is not exactly clear how the sweat glands become blocked, but the process is thought to involve a type of bacteria called Staphylococcus epidermidis. This bacteria normally lives on the skin without causing any harm. However, these bacteria can increase in numbers and produce a sticky substance. One theory is that this substance combines with dead skin cells and excess sweat to cause blockages in sweat glands. In young babies, the sweat glands aren’t fully developed, which makes them more prone to becoming blocked in hot environments.

The blocked glands can then burst, releasing sweat into the skin, where it causes inflammation that leads to redness, swelling and itching.

Factors that contribute to the development of prickly heat include:

There are three types of prickly heat.

Miliaria crystallina is caused by blockage of the sweat glands close to the outer surface of the skin (epidermis). The rash is made up of tiny blisters that look like beads of sweat. In many cases, this type of prickly heat is only mildly itchy or not itchy at all. The blisters tend to burst quickly and easily on their own.

Miliaria rubra occurs deeper in the skin than miliaria crystalline, but still within the outer epidermis layer. The rash appears as clusters of tiny red blisters that often cause itchiness and a prickly feeling. These blisters usually develop in areas where clothes rub against the skin, sometimes in several areas at once.

As miliaria rubra is the most common type of prickly heat, these tend to be the symptoms that many people associate with the condition. The rash may occur within days of exposure to a hot and humid environment. However, it quite often doesn’t appear for weeks or even months. In most cases, the rash will clear up on its own within a few days after the sweating stops.

Miliaria profunda develops when the blocked sweat glands are located deeper again, in the middle layer (dermis). This rare type of prickly heat usually tends to occur in people who live in hot environments and have previously had miliaria rubra. The blisters are bigger, deeper and more uncomfortable than those seen in the other types of prickly heat.

Symptoms of miliaria profunda last for several weeks, as this is how long it takes for natural growth of the sweat glands to clear the blockage. 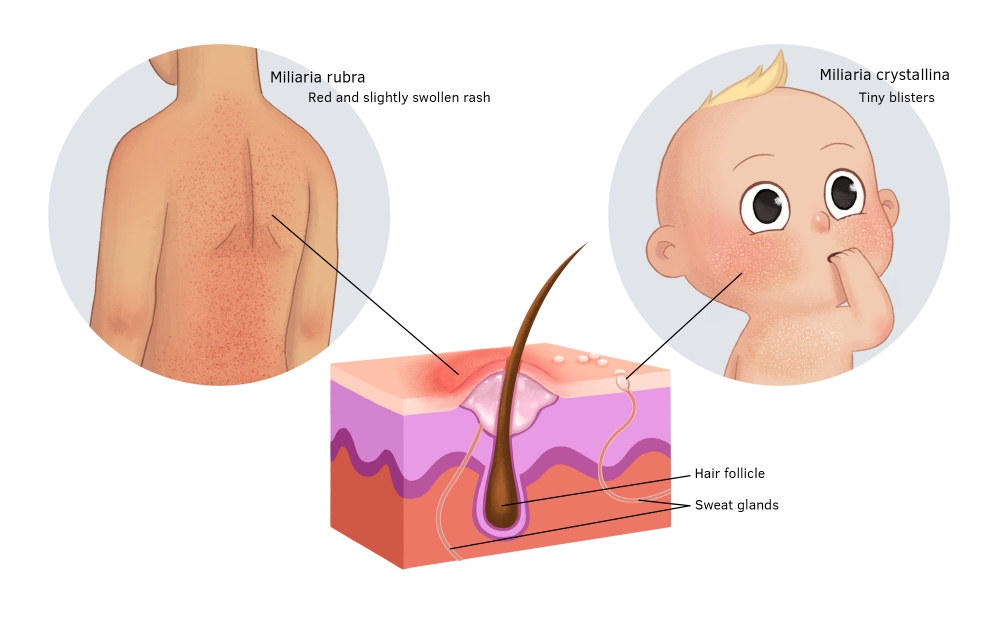 The general symptoms of prickly heat include:

Adults usually develop the prickly heat rash in areas where sweat collects, such as the back, armpits, inner thighs, under the breasts and in the elbow and knee creases. In babies, the rash is most common on the chest, face, shoulders and neck, but can also appear in the armpits, groin and elbow creases.

There are no tests for diagnosing prickly heat. Your doctor will generally be able to make a diagnosis by looking at your skin and asking questions about symptoms.

In most cases, prickly heat clears on its own in a few days without any particular treatment. However, if symptoms are causing discomfort, treatment options include:

During a bout of prickly heat, sitting in an air-conditioned space for even just a few hours a day and applying a cold compress may provide relief from itchy or prickly feelings. Wearing light, breathable clothing and avoiding irritating soaps and moisturisers may also help to clear the rash faster.

For mild to moderate symptoms, over-the-counter lotions (menthol or calamine) or antiseptic washes (chlorhexidine or salicylic acid) may be used to keep the skin cool and clean. For more severe symptoms, your doctor may prescribe a steroid cream, such as hydrocortisone.

Prickly heat usually clears without any problems, but possible complications include:

If excessive sweating occurs for a long period of time, the prickly heat rash can spread to a large area of your body. Under these circumstances, there is a small risk of fever, which can develop into heat exhaustion. Seek urgent medical attention if you experience headache, confusion, dizziness, nausea or a rapid pulse.

Sometimes a bacterial infection can occur in blocked sweat glands. Symptoms of this include inflammation and itchy bumps that look like pimples. The medical name for this condition is miliaria pustulosa.

Although prickly heat may be itchy and uncomfortable, it isn’t a serious condition. The rash usually clears in a few days without any particular treatment. Some people who develop prickly heat after moving to a hot, humid environment may stop experiencing symptoms in about 2-5 months. However, the condition affects everyone differently.

Prickly heat can be prevented by avoiding environments and activities that produce heavy sweating. Using sunscreens or moisturisers that are labelled ‘water-based’ or ‘non-comedogenic’ (not pore-blocking) can prevent sweat glands from becoming blocked. Wearing loose clothing made from a natural fibre, such as cotton, is usually also recommended.