What is jock itch?

Jock itch is an uncomfortable itchy, red rash in the groin area, caused by a fungal skin infection. It is refered to as jock itch, because athletes (colloquially known as ‘jocks’) commonly get the condition. However, anyone can potentially develop it, particularly individuals who have a fungal skin infection elsewhere on the body.

Jock itch, which is medically known as tinea cruris, is a common fungal skin infection, caused by a group of mould-like fungi called dermatophytes. These fungi also cause other skin infections (collectively known as tinea) such as athlete’s foot, when it affects the feet, and ringworm, when it affects other areas of the body. The fungi live off dead skin cells and thrive in warm, moist surfaces, such as those found in the groin when it gets sweaty. You can catch these fungi from close contact with someone who has tinea, or contact with unwashed clothing or towels used by someone with tinea.

Anyone can develop jock itch, however, athletes more commonly get it due to regular sweating while playing sports, chafing from wearing protective clothing and/or sharing clothes. It is also more common in men. The risk of developing jock itch can be increased by being obese, which results in moisture being trapped in skin folds. Medical conditions, such as diabetes, increase the risk by lowering the body’s immune defences. The severity of jock itch can vary upon the presence of these underlying risk factors. 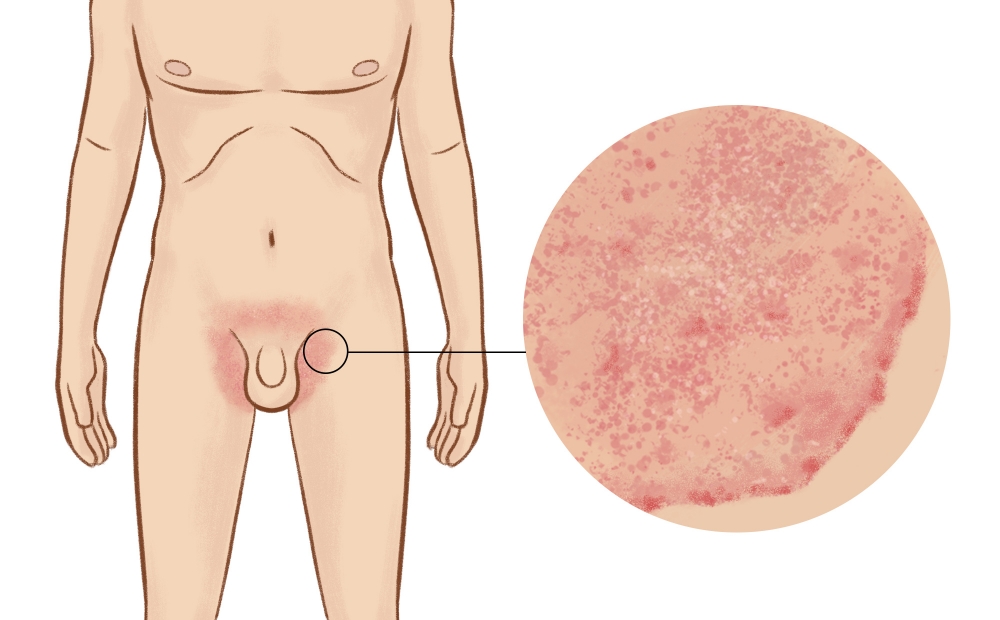 A scraping of your skin from the affected area is added to potassium hydroxide (KOH) and examined under a microscope. KOH destroys non-fungal cells, making it easier to see if any fungal cells are present.

If fungus is present on the skin, it can be cultured using a special gel plate that selectively grows it.

A skin biopsy is performed only when other skin infections need to be ruled out.

Regularly bathing followed by thorough drying with clean towels, particularly using a separate towel for the affected area, will help to contain the infection. Changing your clothes, especially the underwear or other clothing in direct contact with the affected area, at least daily, will also help.

Jock itch can be treated with topical antifungal creams that are available over the counter, such as ketoconazole and terbinafine, applied directly to the affected area. Oral antifungal medications such as fluconazole are used for infections that don’t respond well to topical cream. Treatment for some time after symptoms have subsided is required to prevent it returning. It is also advisable to treat other fungal skin infections, e.g. athlete’s foot, to prevent spread throughout the body. If symptoms persist for longer than two weeks, seeing your doctor will help.

Oral antifungal medications can cause nausea and liver damage if used for a prolonged period of time. Antifungals applied to the skin (topical) can cause itching and a burning sensation.

Jock itch spreads easily to other parts of the body, where it can cause tinea and athlete’s foot.

Jock itch can cause breaks in the skin, which can lead to concurrent bacterial infections that will require separate treatment with antibiotics and may also cause permanent scarring.

Although jock itch can usually be cured, it is common for it to come back.

Maintaining good hygiene by washing and drying properly, washing linen and towels in hot water and not sharing them with others, can help prevent the spread of jock itch.